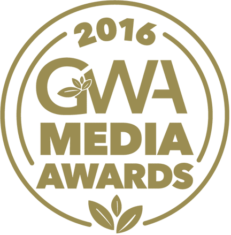 Garden Making magazine has won the 2016 Media Awards Gold Medal for Best Overall Magazine under 100,000 circulation, awarded by the Association for Garden Communicators (GWA) for issue No. 24, Garden Essentials. The award was presented at the GWA Annual Conference & Expo Award Dinner on Sept. 19, 2016, in Atlanta, Georgia.

“This is our second gold GWA award,” says editor-in-chief Beckie Fox, noting that issue No. 15, Fall 2013 — with its special focus on native plants — picked up gold at GWA’s 2014 Media Awards, in Pittsburgh. “We are honoured not just to win but to be here at the conference in person to accept the award!”

Garden Making Design Director Gary Hall created a dramatic cover image of a well-loved shovel surrounded by details about the articles inside.

Here’s what one of the GWA judges said about the Garden Essentials issue:

Brevity is beautiful. Garden Essentials is a powerful tool for any gardener, not just a novice. This series would serve any gardener well, but also a thoughtful  garden writer or editor looking for ideas. Garden Essentials is full of brief “entry points” on countless topics, and a usable reference. Well-organized, beautifully laid out; each photo and graph serves a purpose without the design getting in the way of information.

The GWA awards recognize individuals and companies who achieve the highest levels of talent and professionalism in garden communications. The 2016 competition had more than 250 entries in 56 categories, and Silver Awards of Achievement were given to 59 pieces of work making them semi-finalists for Gold Awards. A total of 11 Gold Medals were awarded in 2016.

“The GWA Media Awards showcase the writers, photographers, editors, publishers and trade companies that have pursued excellence in gardening communication in print or electronic communications,” says Kirk Brown, president of GWA. “The Media Award winners have been judged by industry experts and show significant distinction and merits that exemplify exceptional work.”

Since the early 1980s, the GWA Media Awards program has recognized outstanding writing, photography, graphic design and illustration for books, newspaper stories, magazine articles and other works focused on gardening. In recent years, the awards program has expanded to include on-air talent, production and direction for radio, television, video, Internet and other electronic media.

To view all the 2016 GWA Media Award recipients, visit www.gardenwriters.org.

Garden Making is an independent Canadian print and digital magazine published quarterly by Inspiring Media, which owns the trademark to the name Garden Making Canada. Based in Niagara-on-the-Lake, Ont., the brand also produces original content on its website and curates information of value to gardeners via social media and e-newsletter platforms.

The newsstand single copy price is $6.99; the one-year subscription price is $19.96. All other platforms currently offer free access.

The mandate of the family business is to offer ideas and inspiration to home gardeners in Canada, enhancing individual enjoyment and engagement, in turn galvanizing gardening communities throughout the country.

The magazine was launched in 2010 by Beckie and Michael Fox, two longtime magazine professionals. Beckie, Garden Making’s editor-in-chief, was on the editorial team of Canadian Gardening magazine for its first decade, from the launch in 1990 until becoming its editor, from 1999 to 2001, when it was owned by Avid Media. Michael, CEO and publisher of Garden Making, retired from Rogers Publishing in 2012, where he had worked in senior management for more than 30 years. He is the 2015 recipient of Outstanding Achievement from the National Magazine Awards Foundation.

In 2016 Toronto Star columnist Sonia Day wrote that Garden Making “offers real, practical information about growing things (instead of lifestyle piffle) with lovely pictures and an easy-to-read layout.” In 2012 Garden Making was cited as a recent example in an exhibition of British and Canadian gardening literature throughout the centuries at the Thomas Fisher Rare Book Library, University of Toronto.

GWA provides leadership and opportunities for education, recognition, career development and a forum for diverse interactions for professionals in the field of gardening communication.

The GWA Awards & Honors Dinner on Sept. 29 was sponsored by Proven Winners Color Choice shrubs and emceed by Dr. Allan Armitage of the University of Georgia. Gold awards went to:

Other silver medals to winners in Canada

Other winners of 2016 media awards silver medals from Canada include:

View Calendar
Manage Cookie Consent
To provide the best experiences, we use technologies like cookies to store and/or access device information. Consenting to these technologies will allow us to process data such as browsing behavior or unique IDs on this site. Not consenting or withdrawing consent, may adversely affect certain features and functions.
Manage options Manage services Manage vendors Read more about these purposes
View preferences
{title} {title} {title}