You are here: Home / Making a Garden / Heat-resistant clematis

If you garden where summers are hot, it makes sense to grow flowering plants that stand up to heat waves from mid- to late summer. Several cultivars of heat-resistant Clematis texensis (Zone 5), sometimes known as Texas scarlet or leather leaf clematis (so named for its textured glossy foliage), fit into this category. The hot and dry Texas heritage of ruby-red C. texensis has persisted into the modern cultivars, making them resilient in hot weather. I particularly want clematis with red flowers to complement the many purple-flowering perennials already in the garden, and the genes for red colouring have also persisted in several cultivars of this species.

These beautiful flowering vines bloom heavily for six weeks, carrying on in full sun and heat. The species influenced ‘Gravetye Beauty’, an early cultivar bred in France about 1900. It has intense, blood red flowers three inches (8 cm) across, with widely spaced and pleated petals and a central boss of creamy white stamens. I’ll grow it on a trellis near a purple butterfly bush. If you like red clematis, also look for bluish crimson ‘Sir Trevor Lawrence’ and vibrant deep pink ‘Etoile Rose’.

I’ve always followed the instructions to plant clematis with their feet in the shade and tops in sun, often positioning them in cool partial shade. Most often I put a large, broad hosta at the foot of clematis vines to shade their roots and help keep the soil moist. However, C. texensis cultivars are more accepting of warm and dry soil conditions, and will be comfortable in full sun with good soil drainage.

Regardless of their tough heritage, however, they shouldn’t be abused. Regular irrigation is the key to keep the vines pumping out flowers from July through September. I feed all my clematis in May with a granular perennial plant fertilizer that has a higher middle number (such as 6-12-8), and that makes quite a difference in the number of flowers produced.

I won’t bother with a plant in front of each C. texensis vine, but will provide a four-inch (10-cm) mulch of leaves over the root zone. In late autumn I’ll cut the vines down to about 12 inches (30 cm) from the ground. Cutting back in autumn is preferable, as the vines sprout in early spring.

If you’ve got any kind of purple flowering plant in your garden, you might want to match it up with one of these heat-resistant red Texan beauties. 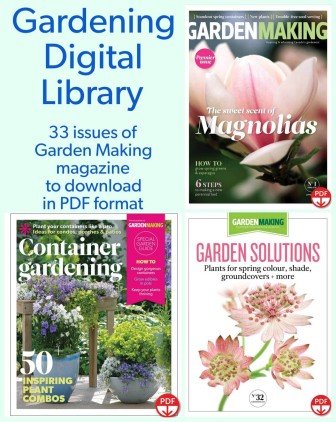