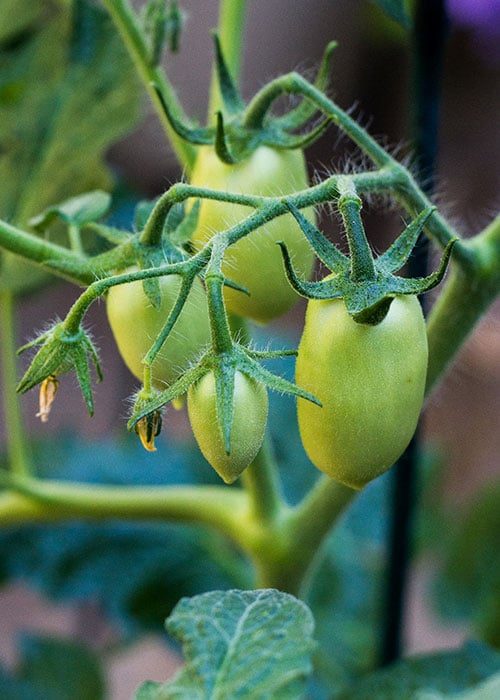 Indeterminate tomato plants require staking and vigilant pruning because they have the capacity to make sprouts (called suckers) from every leaf node. Each sucker is a new vine stem initiating from the original mother plant, and managing the suckers is a large part of getting the best from indeterminate tomato plants. Left untended, the plants are soon pulled over by the volume of foliage and the fruits become buried within the mass of sprawling vines.

If tomatoes are growing wild on a frost-free South American hill where they can sprawl in all directions, the suckers would set an enormous number of fruits and have a long season to ripen. But growing in a northern garden, plants are usually staked up, and must produce and ripen fruit in a short growing season. If all suckers are allowed to grow and produce flowers, many fruits won’t have time to ripen before frost. Decisions must be made about what suckers are allowed to remain and produce mature fruit.

The usual advice is to select one or two suckers sprouting low on the main stem and allow them to grow. This leaves a total of three productive vines on each tomato plant. Suckers sprouting from leaf nodes higher up on the main stem should be cut off. Each of the three stems that remain (the mother vine and two suckers) will need its own stake to support it as it grows and produces fruit.

However, you can never turn your back on a tomato plant. Every leaf node on the two suckers allowed to develop from the main stem will also initiate new suckers, and if these subsequent suckers aren’t also removed (along with those on the main mother stem), the end result is a tomato plant that will conquer a city block.

I actually enjoy tending indeterminate tomatoes and try to remove these rambunctious sprouts twice a week while they’re small enough to be picked out with a finger and thumb. For any sprouts that hide long enough to get a stronger head start, there’s always my sharp pocketknife. If I’m away for any period of time, the suckers’ growth is comparable to what you might find in an abandoned zucchini patch—they’re big, and there are a lot of them.

However, I have a hard time being strict about removing excess tomato vine suckers. Each one is so robust and willing to grow (and quickly!), putting out their initial flowers when only six inches (15 cm) long. Each little smooth, perfectly formed tomato inspires thoughts of jars and bottles of sauce, juice, homemade catsup and relishes. Who would want to interrupt such a display of tomato enthusiasm? But for the sake of getting a good crop of premium tomatoes in a short growing season, I’m happy to spend time micro-managing the vines. That’s one way you can divide the world—those who enjoy messing around with tomato plants in the warm sun and others who let the vines sprawl all summer and come back in August to salvage what they can.