Home » Tree bylaw survey: love of trees, not of laws

More than 1,000 Garden Making readers took the time to answer our recent survey about municipal tree protection bylaws, with 375 providing comments. To analyze the results, we’ve grouped the 1,064 replies by whether they knew if their town has a tree bylaw (39%), didn’t know (40%) or there is no bylaw (21%), and then compared the results and comments. 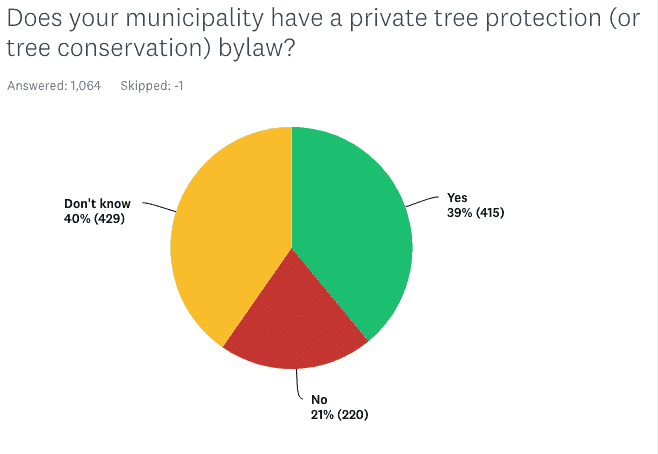 Across all groups, concern about the environment is the primary reason people are motivated to think about tree bylaws. When asked to pick up to three reasons from a list of six choices, 81% selected “Trees are important to our environment.”

The other top two choices cited are the tree canopy of the community and putting a value on trees as part of the community’s heritage. Only 49% thought that a tree protection bylaw forces people to think twice about cutting trees and only 41% think that it encourages new trees to be planted. 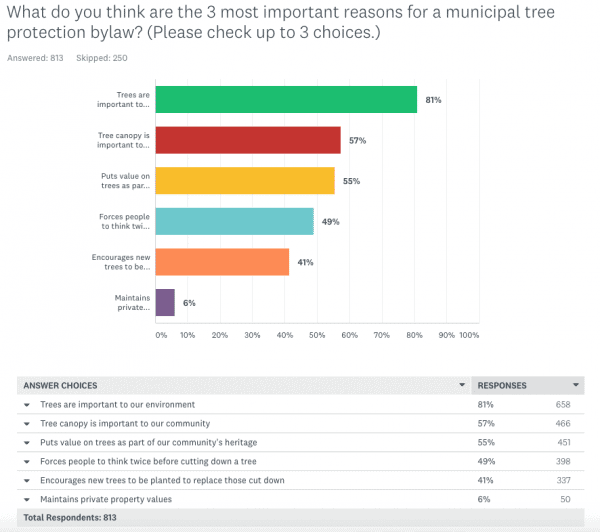 While most of the responses were from Ontario, we heard from people in more than 400 communities across Canada. Many have the same anxiety about trees being cut down.

“When we first bought our home in this neighbourhood, there were a number of mature trees that acted as selling features for us,” says a resident of Medicine Hat, Alberta. “Sadly, many of them have been cut down in the last few years. For us, this makes our neighbourhood less desirable to live in, and it is a factor in considering relocation. My heart races whenever I hear a chainsaw and I worry that another majestic tree is being killed.”

From Port Perry, Ontario: “Recently, many trees in our town have been cut to make way for building more houses. It would have been possible to leave some of these mature trees that took years to grow. No consideration for how trees improve air quality, and have so many other important benefits to our environment.”

“My neighbourhood is drastically changing as developers have discovered our charm,” says a respondent in Ottawa. “However, the developers and their clients are not respectful of the existing ‘feel.’ Houses that are too big are being built and consequently gardens with their mature trees are disappearing. Those of us who cherish the traditional style of our neighbourhood are saddened by what is happening.”

Among the 406 who said their community has a tree protection bylaw, we asked about their impression of the effectiveness of their tree protection bylaw. Keeping in mind that we are reporting on people’s impressions, only 26% said that the removal of trees seems to follow the bylaw process while 38% said some people ignore the bylaw and get away with it. 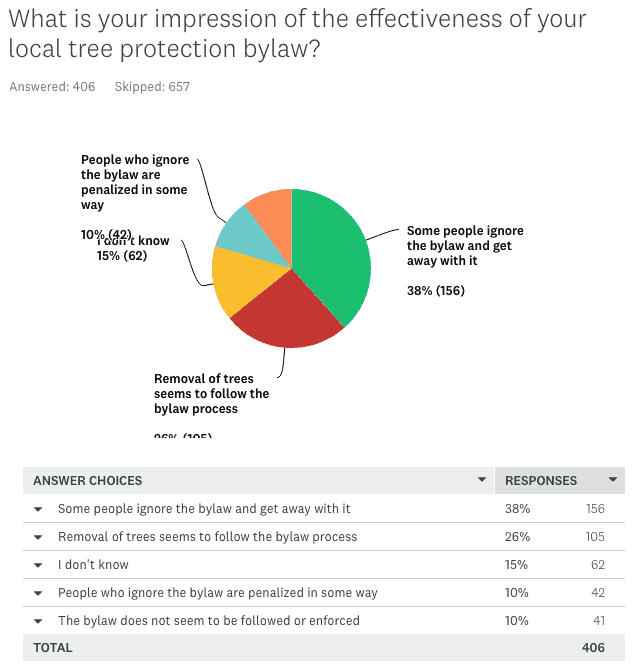 Several readers provided links to municipal bylaws, with comments about the complexity of the process.

“I approve of the bylaw, but some aspects are silly,” says a resident of Abbotsford, British Columbia. “It requires that for every tree cut down, 3 new ones must be planted. It sounds great in theory, but I know of a case where there was not room for 3 trees on that particular city lot.”

A respondent in Vancouver says: “Vancouver bylaws have had some impact on indiscriminate cutting down of trees, as well as having a strong replanting program on both public and private property. There are, however, problems with private individuals and property developers finding ways to circumvent bylaws and/or ignoring those bylaws altogether. Sometimes nothing is done, sometimes fines are imposed, but seem to have little effect given the costs of property in the city (fines sometimes seen as merely part of the cost of developing a property.)”

Several residents from Oakville, Ontario, commented on tree protection efforts. “Any serious tree bylaw needs to be accompanied by sufficient inspectors and arborists. And planners have to stop allowing variances that enable the destruction of healthy trees for no reason other than the desire for huge homes. Protecting trees is difficult. Demolition and new builds seriously impact the health and viability of allegedly protected trees.”

The case for a tree bylaw was articulated by a respondent in King City, Ontario: “Trees are extremely important in many ways – oxygen, filtering the air, health and well-being; provide habitat and food for thousands of species of living things; roots stop erosion, help retain moisture and water during drought; mitigate flood conditions; aesthetic beauty; contribute to heritage. A tree preservation bylaw is very helpful in providing direction for property owners in the wise stewardship of trees and highlights the value of trees.”

A number of people are simply opposed to any governmental regulation affecting their personal property.

“Even though I feel a tree policy is a good idea, I’m always afraid they will carry it too far,” says a respondent in Sarnia, Ontario. “If a land owner strongly feels the need to remove a tree, they should be able to do it. It could mean replacing it with a new one somewhere on their property.”

The interest in tree canopy extends to rural areas as well.  In Picton, Ontario, a group called Tree the County is trying to protect the existing tree canopy in the county. “We are hoping to work with the local municipality on drafting a new tree policy that will ensure the preservation of old trees and replacement of trees that need to be removed. It has proven to be a difficult process.”

Others are critical of their local town for not looking after trees on public property. Many expressed horror at the so-called tree-trimming practices used to protect hydro lines from tree limbs.

“In several cases, the city itself ignores its own tree bylaws, clear-cutting whole woodlots for parking lots, etc.,” says a respondent in Markham, Ontario.

“The city doesn’t set a good example as it removes a lot of trees for convenience,” says a respondent in London, Ontario.

“When they fix roads, they first cut down the trees and that ruins the ambiance of the area,” comments a respondent from Gananoque, Ontario.

Sometimes, the consideration of a tree bylaw can be lethal to trees.

“Our municipality had a proposed tree cutting bylaw and before it was considered by Council, many property owners had a large number of trees cut down. Council didn’t pass the bylaw and now we have no protection and have lost a lot of mature trees,” says a respondent in Orangeville, Ontario.

A number of people said they opposed the idea of a tree bylaw because it might prevent them from removing an old over-grown tree that had become dangerous. However, most bylaws include criteria that allow for the removal of trees in such circumstances.

“I hate to see the canopy destroyed, but I disagree with government regulations on trees on private property,” says one resident of Hamilton, Ontario.

Also in Hamilton, another respondent says, “The environmental activists and advocacy groups tend to focus on motherhood stuff  like planting trees in parks and brownfields, giving away free trees, promoting native trees. Going for a tree bylaw would probably be divisive and I think our enviro groups fear losing support by going against the property rights mentality, which is firmly entrenched here. There is so much work to be done and this heavy-hitting stuff is not high priority. Also, arborists fear that the mere mention of an impending tree bylaw would cause an avalanche of tree-felling, as homeowners cut now while they still can.”

One general impression from looking at the range of comments is that people are most concerned about the impact and pressures of larger-scale property development, but these activities seem to bypass the tree bylaw process because the tree bylaws are targeted more at individual property owners.

Certainly, people do feel that they can have some influence over their local government. In the survey, 60% said they think they can affect local government a great deal or a moderate amount. 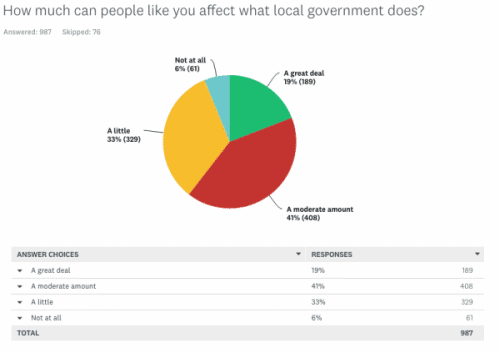 Tree protection when there is construction is also important, several people commented.

“Aurora has a tree cutting bylaw. But that is what it is, it has rules for cutting trees, but it is not part of an overall tree protection and preservation program,” says a respondent in Aurora, Ontario.

“My concern is politicians are unaware of current scientific opinion about exclusion zones around trees in (re)development areas,” says a resident of Mississauga. “The current zones protect the tree and its bark for sure, but there is now opinion that the feeder roots closer to the surface and farther away from the tree need more protection from heavy machinery than the larger and often deeper roots close to the trunk. The current exclusion zones route heavy machinery directly onto the area which is most at risk. Not sure what can be done about that, as access to the site will be required, however I would like to see the landowner required to provide remedial treatment to the fine root area once construction is complete.”

“Municipalities could be a positive influence on the type of tree chosen for a suburban lot,” says a respondent in Ottawa. “People are quick to cut trees that have outgrown the space or are seen as problems. They don’t replace these trees with a better choice, resulting in neighbourhoods with lots of houses, big driveways and no trees.”

Several people commented on the LEAF (Local Enhancement and Appreciation of Forests) organization in Toronto with its backyard tree planting program that offers native trees and shrubs to property owners at a subsidized cost. LEAF also provides educational information about caring for new trees.

“Our municipality (for residents only) has a heavily subsidized native tree sale on Earth day annually,” says a respondent in Georgetown, Ontario. “They have had a cull of invasive species recently.”

From Athens, Ontario: “I was responsible for obtaining Council’s consent and organizing funding for a tree inventory in my community. This helped to educate Council to the need to replace the over-mature maples lining our streets, which were dying. We now have an annual program which provides 6- to 7-foot maple trees to residents for $20 each, for planting in their front yards. They pledge to water their tree for the first two years after planting.”

A respondent in St. John’s, Newfoundland, says: “Encouraging more communities to participate in Communities in Bloom programs would increase awareness, understanding and appreciation of the importance of urban forests and supporting bylaws to protect and manage.”

We did not expect our survey to be necessarily representative of public opinion because we primarily polled people on our email lists or our website visitors. Several people were critical of the design of the survey or its emphasis on bylaws rather than on a wider range of options for tree preservation and appreciation.

However, with increasing property development pressures coupled with the loss of thousands of trees to diseases and insects such as the emerald ash borer, anxiety about the local tree canopy is obviously closer to home for more people.