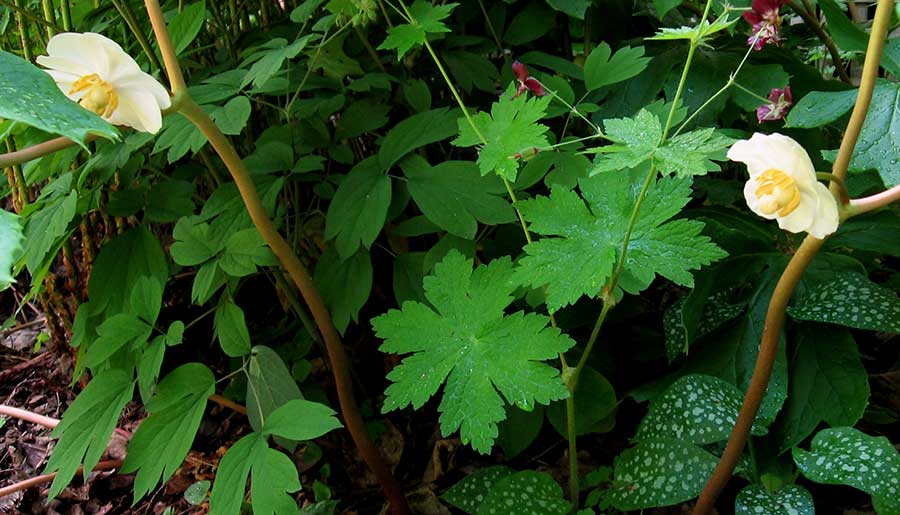 In spite of trying my utmost, I was never able to grow our native mayapple (Podophyllum peltatum, Zone 3) in my Toronto garden. Each spring like clockwork a single leaf poked its head up, but in more than a decade I never achieved the requisite two leaves that signal a flower is on the way. When I moved 100 kilometres north of the city, it was a completely different story: What started out as three small pots has now become a large, robust mayapple colony, and in order to curb its spread, I now find myself thinning out (read: pulling up) about half the plants after they have finished blooming. Note to Self: Be careful what you wish for.

Native to Nova Scotia, Quebec and Ontario, the mayapple is the last of our spring “ephemerals” to bloom in my north-facing woodland-style front garden, although in cool, wet summers the plants stay in active growth until autumn. If their leaves begins to look tired and ratty in late summer, out they come. Mayapples don’t seem to mind this rather ruthless method of harvesting, and their creeping underground rhizomes always manage to supply plenty of new flowering shoots the following year.

Mayapple flowers grow in the forks of their two large, umbrella-like leaves, and unless you intentionally peer beneath the foliage, it’s easy to miss their luminous two-inch (5-cm)-wide shiny white blooms. Preferring part to full shade and moist, rich soil, they grow 18 inches (45 cm) tall and may spread up to four feet (1.2 m) wide, making them suitable for large shady borders — particularly in colder zones where plants are less likely to go dormant in summer — or where space permits, as a woodland groundcover.

Like most flowering plants, the roots and leaves of mayapples are toxic, as is the unripened green fruit. Nevertheless, after removing the skin and seeds from ripe yellow mayapples in mid- to late summer, the pulp is apparently edible (hence the common name). In the 1962 foodie classic Stalking the Wild Asparagus, Euell Gibbons (1911-75) wrote, “When I eat a thoroughly ripe mayapple, I am reminded of several tropical fruits — the guava, the passion fruit and the soursop, but I can’t honestly say that it tastes like any of them.”

Mayapple jelly recipes are plentiful enough on the Internet, although most call for at least two cups of ripe (almost translucent yellow) sliced mayapples for a yield of just “four small jelly jars.” As mayapples are about the same size as green grapes, I can’t imagine how many flowering plants it would take to gather the amount of fruit necessary for one cup of jelly.

I must admit that I’ve never mustered the epicurean courage to eat mayapples myself — jellied or otherwise — but I’d love to hear the impressions of any surviving readers who have.

As the spring ephemerals complete their brief life cycle, the native ferns start to take over in my woodland garden. One of the most elegant and graceful of these — and my personal favourite — is the maidenhair fern (Adiantum pedatum, Zone 3). Native from Nova Scotia to Ontario, I cherish it for its delicate appearance and tough constitution. Individual plants grow about 16 inches (45 cm) tall by 10 inches (25 cm) wide, and associate well with foamflower (Tiarella spp. and cvs.) as well as non-native shade-lovers such as brunnera, hosta and columbine-leaved meadow rue (Thalictrum aquilegiifolium).

Maidenhair ferns flourish in consistently moist soils that drain well and contain plenty of organic matter — leaf mould and shredded leaves are perfect — and although tolerant of full shade, they appreciate a few hours of morning sunlight. Spreading slowly via underground rhizomes, where they find conditions to their liking, maidenhairs form luxurious drifts within a few years. Their horizontally held crescent (or fan-shaped) sprays of leaflets (called “pinnae”) are unique among ferns, and are set off to perfection by their wiry, purple-black petioles (“stipes”) and leaf stems (“rachis”).

The western form of the fern is known as the Aleutian maidenhair (A. aleuticum, Zone 3); historically considered a variety of A. pedatum, it was separated into its own species in 1991. Native to Alberta and British Columbia as well as several isolated eastern locations (including in Newfoundland and Quebec), the differences between the two forms are insignificant, and some fern experts (called “pteridologists”) now group both types together under A. aleuticum. Either way, it’s always best to grow the variety that’s native in your own neck of the woods.